Busty Stripper Screwed On The Stage!

Busty Stripper Screwed On The Stage! 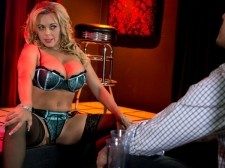 Amber used to strip at Scarlett’s Cabaret in Hallandale Beach, Florida. Amber enjoyed the heavily sexualized atmosphere and oddly addictive lure of strip clubs where women could be whoever they wanted to be in dimly lit clubs and men could enjoy an endless parade of female flesh. If you have spent afternoons or evenings in strip clubs, you know the kind of sexual energy and tension that is in the air as soon as you walk in the door.