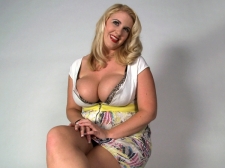 This babe loves to Zumba, this babe loves to wrestle other chicks in the mud and she loves to karaoke. Alabama dominant-bitch Rockell talks to SCORE about fullsome funbags, hobbies and more in her 1st full-length interview. Rockell is on a cowgirl set for a photo-shoot in the December ’13 Voluptuous.

Rockell has been featured in two SCORELAND Blog movie scenes. They are great, but we needed more. More! More Rockell! That Southern woman chaser voice, that attractive kisser and that voluptuous body will kill ya! When u first saw Rockell, did you think this babe resembles that babe could work at Bra-busters? Well, she did.

“I worked at Mambos, and obviously I filled out the requirements very well and the tips were very worthwhile,” she told. “I was truly in the restaurant on Christmas Day eating with a ally. I was dressed cute, but my knockers weren’t out. I had on a sweater cuz it was cold. My waitress was a very captivating Whoppers angel and that babe was adore, ‘Would you love to work here?’ And I was adore, ‘Oh, why not? Of course.’ So she went and got the manager and that petticoat chaser hired me on the spot and I was a Scoops beauty.”

Of course this skirt chaser hired her. Only the world’s most-incompetent manager wouldn’t hire Rockell.