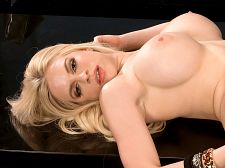 Jayden Prescott‘s got a big-boob fetish. This is an understatement. “I have 100 SCORE DVDs and dozens of SCORE and Voluptuous magazines at home,” Jayden wrote.

Jayden took four very basic nude photos at home (just standing, arms at her sides) and emailed them to the SCORE studio (model@scoregroup.com).

When Jayden arrived, she said that she and her husband are big fans. Her husband has been a SCORE and Voluptuous reader since 1993 and is a SCORELAND member also. He’s the reason she’s a fan. Meeting and marrying Jayden fulfilled a major life’s goal for him. His own SCORE Girl at home!

“I’ve got the greatest husband, letting me do SCORE while he’s home,” Jayden said. “He didn’t even mind that I’m going to have sex. In fact, he encouraged me to do it. The thing that attracted me to my husband was how consistent he was. He’s a down-to-Earth guy. Never pushy. Never judgmental. He kinda lets me do my own thing. That’s the best part. He lets me be here, and he’s at home working. He’s been reading the magazines since 1993. Pretty much since the beginning. My husband was the second guy I’ve had sex with. The guy I’m with in this video [JMac] will be the third guy I’ve ever fucked.”