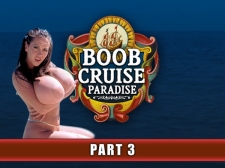 What did it mean to sail on the Boob Cruise? It meant staggering to couch each evening at four a.m. and awakening up two hours later for another day of act and a new island. It meant eating at a busy table of busty shipmates where there’s not ever a silent pont of time. It meant dancing with a scantily-clad girl who laughed when her bigger in size than average tits fell out of her suit. It meant looking at a pure darksome sky and noticing the stars like never before. It meant the heady scent of suntan lotion and sweat emanating from suntanned girl-flesh. It meant living in your own separate world, and soever was happening back home, well, that did not matter. The ship was the world.

This ship, the Star Clipper, sailed to Anguilla, Prickly Pear Island, St. Maarten, Tortola, Virgin Gorda and other islands that majority people know about merely from tour magazines and television.

This leg of Boob Cruise Paradise kicks off with the morning aerobics class on deck. This daily workout was open to everyone although majority of the men were still sleeping off the previous night or on their second cup of coffee. A scarcely any were on the sidelines watching the large impressive flaunt as the beauties in their skimpy Health Lap dancing club hot clothing moved in unison. Morning and early afternoon photo discharges were the order of the day, one as well as the other on the deck and on Virgin Gorda. The evening was for dinner followed by strip flaunts performed by the high-reaching exotic dancers and then climaxing with partying all over the ship until early morning. The booze and the bosoms flowed freely.

Wrote Chuck, returning passenger and the ship’s log slavemaster that year, “To be appropriately blunt, and from talking to the boyz, I suppose I speak for everyone who went on Boob Cruise ’98, the solely bad thing about this complete week is leaving! I swear, if somebody were to handcuff all of the passengers and angels to the ship and hand me the key, I’d toss it overboard!”

“I tell everyone that Boob Cruise ’98 was the wildest week of my life,” recalled passenger P.R. “And that includes innumerable Mardi Gras, fraternity parties, bachelor parties and other parties. I came for the women, and they were everything I thought they’d be and more, but I also enjoyed my stay due to the great boyz I met on the Cruise, the SCORE employees and the complete sailing experience!”